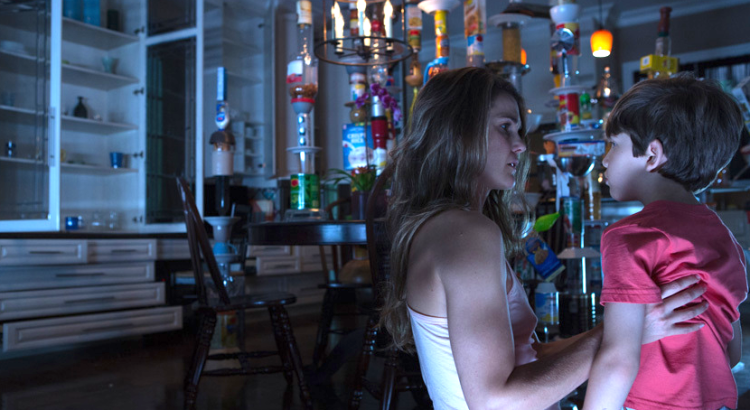 Elevator Pitch: A husband and wife with two young sons face some fimancial difficulties as the husband tries to find work, but soon their problems become unimportant as strange things start to happen around their house, and as well as their burglar alarm being activated without any visible entry, both the youngest child and the parents are apparently affected by outside influences. After the house is attacked by birds and the wife begins to see figures outlined in the darkness they visit a man who is an expert on unexplained disappearances, and find that they may be being targeted by aliens, and that there is no defence.

Content: There is no sex or nudity, or drug taking although two boys are seen watching  an adult movie, and beer is drunk at a barbecue. I had to look at the IMDb content advisory to see that there were some dream sequences which portrayed some violence, gunshots and wounds. However, the focus of the movie is on events in the dark in the home of the main protagonists, where despite the installation of video cameras and the burglar alarms the house is invisibly invaded. Hence there is a constant level of tension as things get worse.

A View: If anything, some of the events which occur seemed to have no relevance to the suggestion that a possible alien abduction was going to take place. What did the birds have to do with it? One of the critics said that the events were simultaneously overfamiliar and completely baffling, and collectively the critics did not give this outing many points. But it is not too bad, maintaining an acceptable level of tension, so maybe a watch for nothing and you won’t miss much if you are doing something else at the same time.

Additional Info: The director’s previous outing was the shoot’em up Legion, which again was not to everybody’s taste, but I liked it better.