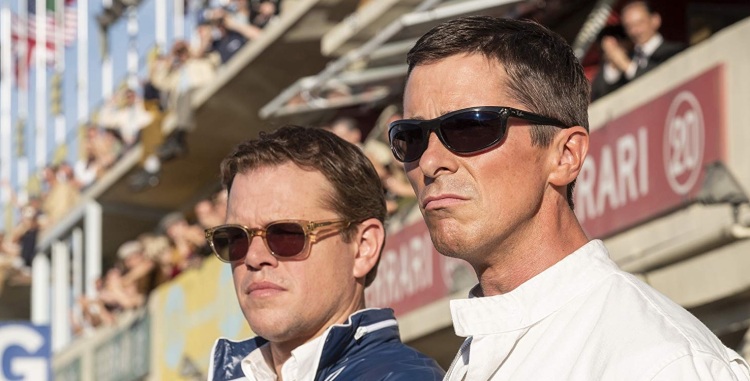 Elevator Pitch: When Henry Ford II tries to buy Ferrari and is instead insulted by Enzo he decides to take on the Italians and commissions Carroll Shelby to develop a racing car which will win the Le Mans 24 hour race. With a bit of help from the left field in the form of Brit, Ken Miles, the GT40 is born and makes its way to the Le Mans stating grid in 1966. But the suits back in Detroit want to get rid of Miles, who they think may be bad for the Ford image. In order to retain him Shelby must bet everything.

Content: Just a bit of beer drinking at times. Ken Miles offends his customers, and argues with Shelby as they deploy AC sports cars in the American sports car scene. The GT40 is developed and the suits argue back in the Ford headquarters as its performance improves and its reliability increases. There are races, culminating in the Le Mans 24 hour race  where Ford and Ferrari come up against each other, the Ferrari the P3 and P4. Wheel to wheel is hardly in it.

A View: Well – up yours “Fast and Furious” – I thought. My enthusiasm might be increased  by the fact that I did a bit of motor racing in the 60s myself, and the car I owned once headed the GT40s off the start line of a BOAC 500. Shelby drives an AC Cobra on the street, a couple of 275 LMs are seen, and on the track the GT40s are breathtaking. The scene where Henry Ford is taken for a ride in a GT40 is inspired. I really hope that this actually happened. If you are any sort of a petrolhead get out and see it. Worth twice the ticket price.

Additional Info: This time about myself. Back in the 1980s I took part in a 24 hour lawnmower race on the Le Mans weekend, and our mower came 4th, beating a works team. When you start it is quite exciting, but then darkness falls, and in the early hours of the morning, when everyone has gone home, it is lonely out there. So it is at Le Mans I think. Film nominated in a number of categories at the 2020 Oscars Won Best Editing.

Author of this site three technical books and two novels
View all posts by Victor R Gibson »
« Shaun the Sheep 2: Farmageddon (2019)
Absolutely Anything (2015) »