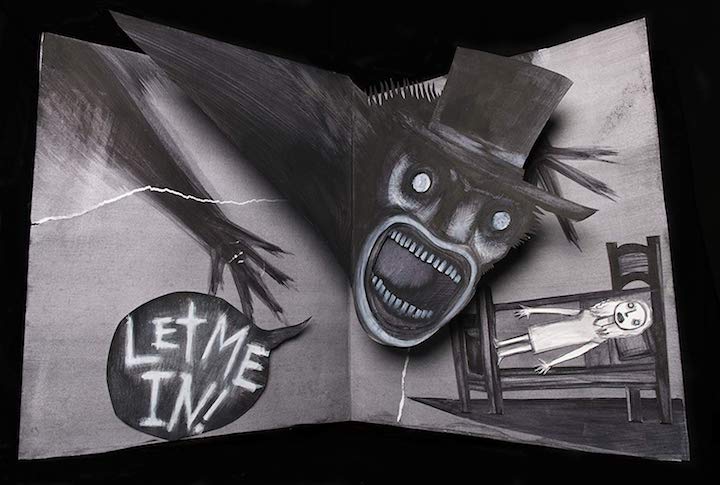 Elevator Pitch: The irrational behaviour of  Amelia’s son, due it seems to an obsession with a shadowy monster, results in his being banned from school and the alienation of her sister. He makes weapons and gives her sleepless nights as his fears cause them both to see and hear things in the dark. A pop-up book called Mister Babadook is discovered, filled with fearful images, and even after she has destroyed it, it reappears. When her husband who has been killed in an car accident when he was driving her to hospital to give birth to Samuel, appears in the cellar Amelia seems to have lost all contact with reality. Will the terrible predictions contained in the book be fulfilled?

A View: This is terrific stuff, and it got 98% on Rotten Tomatoes. The lines between the mother’s possible hallucinations and what could be a haunting are blurred, after all she does kill their dog and at times Samuel is flung about by unseen forces, but we would probably forgive the writer/director for this inconsistency. The book is extraordinary and the emotional changes in the mother and the child are cleverly orchestrated. So well worth the price of a download. It is one of the best horror films I have seen.

Additional info: The film received some money from crowdfunding. 9000 copies of the book were made available at a cost of $80 each. And from a slow start it did eventually show a profit.