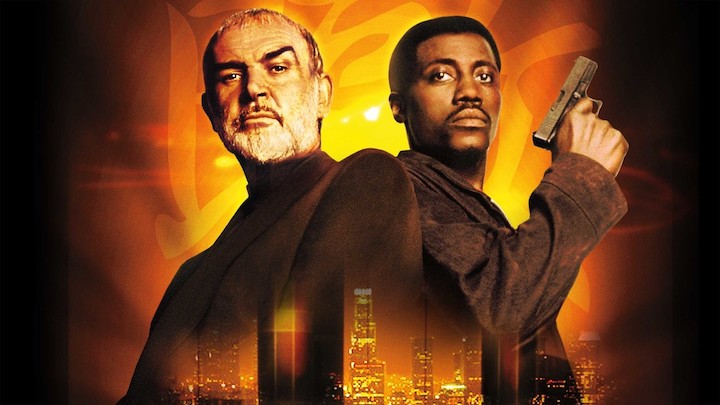 Elevator Pitch: During a party subsequent to a negotiation between a Japanese company and an American company in Los Angeles, the body of a woman, who has died due to strangulation, is found on the boardroom table. A detective and a former policeman who is a specialist in Japanese affairs, are called and they find that the woman has died due to a sexual encounter, and the killer can be seen on a recording provided by a security camera. It seems like an open and shut case, but can it possibloy be true?

Content: There is smoking, drinking, one sexual encounter and a lot of female nudity (just for once I seem to have seen more than the IMDb content advisory). Negotiations take place. There is a party and a sexual encounter and the killing on video. The detectives move about in the world of the businessmen, that of a yazuka boss and the call girls environment. They spend time reviewing the laser discs of the events. The Japanese expert is all knowing and the detective is a bit clumsy. I don’t think there is any gunfire, but various martial arts events.

A View: Most of the critics hated this, but after 25 years it has a sort of whimsical quality. The naked ladies are elegantly presented and during the one sexual encounter the male participant does not even seem to loosen his belt. I was slightly irritated by Sir Sean’s beard which is a sort of Van Dyke, but other than that, curiously, despite the content, little to offend. Probably worth a watch for nothing if you like “who dunits”.

Additional Info: There is a brief scene which includes some hopping robot like devices when the detectives visit a laboratory, and there is a fun description of how this was achieved on IMDb. They were real, but it took several weeks for the developers to achieve the required level of reliability.