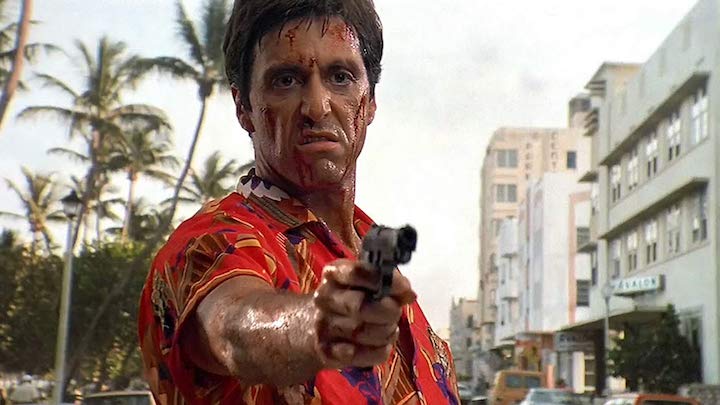 Elevator Pitch: In 1980 Castro allowed boat loads of Cuban to sail to Florida, including petty criminals, one of whom was Tony Montana. By carrying out an assassination in the refugee camp he and his friend get green cards, and are able to work their way up in the Miami underworld. Tony becomes a drug lord due to association with the Bolivian cocaine dealers, and his ruthless execution of those who stand in his way, but his code of honour may eventually result in his downfall.

Content: A violent scene involving a chainsaw, many exchanges of gunfire with hand guns, machine guns and grenades. Some female nudity and implied sex,   and constant swearing, drinking, smoking and drug taking. Tony pursues Elvira, Frank’s mistress who is very cool. He visits his mother who does not accept money from him and he is overprotective of his sister. He has a number of meetings with Bolivians and often counts his money, one of the reasons for Elvira’s contempt.

A View: I love a bit of Art Deco so really appreciated the Miami exteriors, although most filming took place in California, due the anticipated protests in Florida. It was not an instant hit when it came out, but has become a cult movie since and, despite mixed reviews at the time, now is No 105 in the IMDb list and has a rating of 8.3 on the site. It has a sort of surreal quality, intentional I think, and even after 36 years will hold your attention. So an ALMOST MUST SEE.

Additional info: At the time it probably held the record for the use of the F word at more than 200 times. There is a trailer available showing every one.