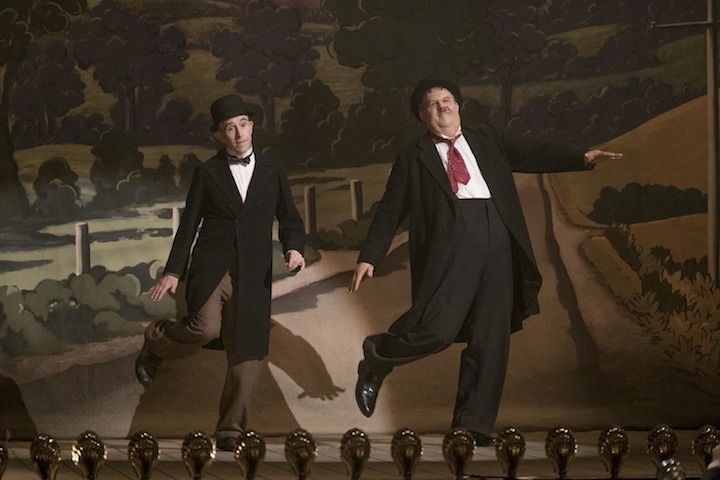 Elevator Pitch: Stan Laurel and Oliver Hardy, Stan and Ollie, have worked for a decade in the 1930s making films in Hollywood which have been popular world wide, but they have not made the fortune they were due because of their contract with the Hal Roach studio. In the 1950s in order to make a bit of money, and to promote the possibility of a film financed by a British studio, they embark on a UK tour, but the theatres remain half empty and their wives arrive from the states causing some discord. The possibility of the film begins to fade, old disagrements start to emerge and Ollie’s health is failing. How can it all end?

Content: There is no content that could offend although some might find the continuous smoking, as was the custom in those days, a bit distressing. We see a number of sequences of the duo doing their stuff, both in the studio in flashback and on stage during the tour. We witness the disagreements with Hal Roach about their contracts, and the behind the scenes problems during the tour.  Bernard Delfont is less than honest with them and their wives are seen to disagee. There are a lot of scenes in the actual Art Deco interior of a London hotel.

A View: Since even general critical agreement that a film is wonderful, does not always guarantee enjoyment, we were agreeably surprised by this oeuvre. Judging by the scenes from real Stan & Ollie films shown during the closing credits, Coogan and Reilly did the iconic dances better than the originals and the relationship between their on stage sketches and their backstage real life was well judged. I am setting up some standards as an alternative to stars, which I don’t like so this is “Well Worth the Ticket Price!”

Additional Info. According to the closing credits, after Ollie’s death Stan received numerous request for him to perform with others, but refused them all, even though he continued to write sketches for them until he himself dropped off the perch.