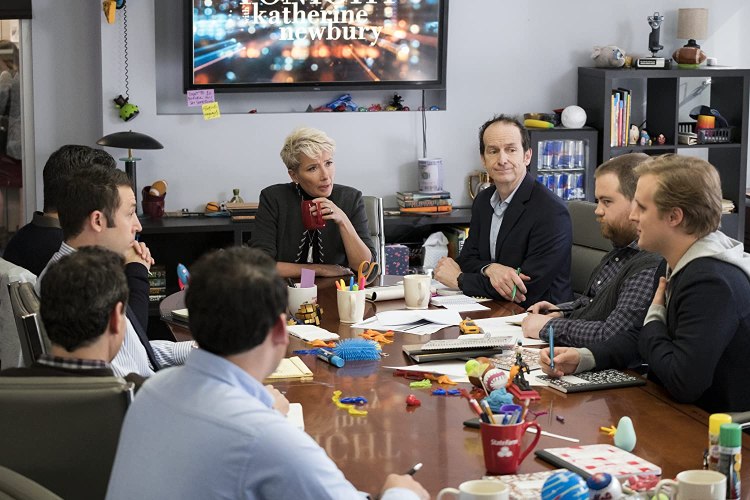 Elevator Pitch: An English talk show host, Katherine Newbury is likely to be replaced due to the fact that her show is losing viewers, and one of the recommendation is that she hires a female writer. Step forward Molly, a woman of Indian heritage with no experience, but who tells it like it is, as opposed to the white male writers who mostly sit about and bicker, but have never actually met Katherine, or been on the set of the show. So will the star allow herself to be replaced willingly or will she refuse, reboot and regain the audience’s affection, and how will her dalliance with one of the writers be viewed by her public?

Content: No sex or nudity, just a bit of drinking and some swearing. We see Katherine going onto the set and delivering her “monologue’ to the studio audience, and interviewing a couple of people with varying results. The writers sit about and are harrassed by the star who can’t remember their names. They give Molly a hard time. Only some of the writers get a bit of a character arc. Molly advises Katherine against her will, and there are scenes with Katherine’s husband.

A View: I had no idea who Mindy Kaling was, which put me at a bit of a disadvantage, but in any case I think the film would have been better if someone other than the writer had fulfilled the central role. I have written a number of plays which have been performed for money, and I have always found that the actors bring something beyond my words to the roles. Despite the fact that this movie was well liked by the critics, it is considered that Amazon, who distributed it, lost $40 million. You can’t get away from the thought that if this is a film about writers, the writing should absolutely sparkle. It doesn’t. So probably a watch for nothing while doing something else.

Additional Info: The show in the film follows what is apparently a standard format in America where there are always a number competing for viewers. The best known at the moment (2020) might be the one hosted by Brit James Corden for CBS.