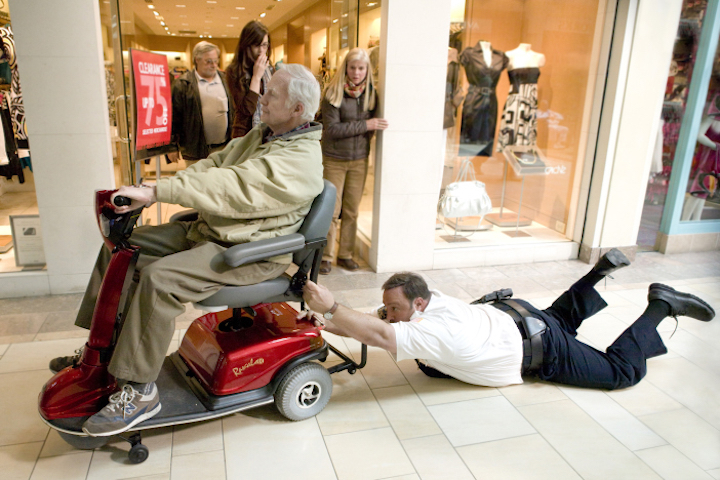 Elevator Pitch: Paul Blart is a failed police applicant, now a security guard, who patrols a mall on his Segway, helping the shoppers and enforcing the rules. He lives with his mum and his daughter and fancies Amy who operates a pop-up hair extension site. When a gang of criminals invade the mall, lock the doors and take hostages, including Amy, he sees his chance to be a hero, using his knowledge of the environment. But time is running out as a SWAT team outside prepare to attack, with a most certain casualties.

Content: There is one scene where Paul accidentally consumes several Mojitos during a nacho eating contest, but otherwise little to offend, although one of the jokes involves a fight with an overweight lady. The criminals dash about on skateboards, bikes and the like. They are apparently collecting credit card numbers. Paul is seen in his home, failing to make any dates on an internet dating site. He tentatively approaches Amy, who likes him. Thre are quite ingenious scenes once the criminals arrive.

A View: This is an Adam Sandler film without Adam Sandler. They are always disliked by both professional and amateur critics – this one 5.2 on IMDb and 32% on Rotten Tomatoes – but make a fortune, and honestly Kevin James does pretty well, more or less managing to engage our sympathy as he struggles with his own inappropriate authoritarian approach. If you like inoffensive family comedy this is not an bad way of passing an hour and a half, so a watch for nothing.

Additional info: the estimated cost of this movie was $26 million, it covered its production costs on its first weekend and was finally to rack up $183 million without counting video and other later presentations. There has been a sequel.