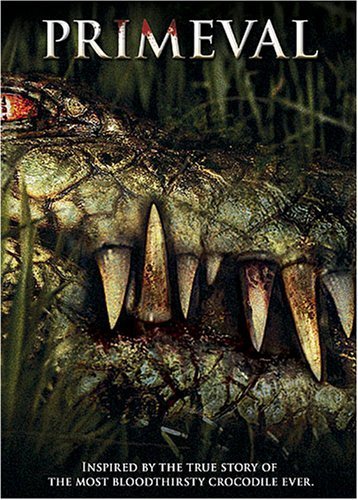 A TV station sends a newsman and his photographer, accompanied by a female animal expert to Burundi to capture an enormous crocodile which has been eating the local population. They assemble a cage and settle down to wait with a couple of local white hunters, but it turns out that the croc is not their greatest worry as the photographer secretly films soldiers employed by the local warlord killing members of the opposition. The team have guards, but are they really on their side?

Worm eaten bodies are seen, the huge crocodile attacks and eats numerous people with resulting blood, guts and severed limbs. In the civil war people are executed, and there is quite a bit of virtually random shooting. There is no nudity or sex, but the female member of the group is saved from being raped when the crocodile chomps the rapist. A few bottles of beer are drunk.

This terrible film ticks all my boxes for a “DON’T SEE”. The random violence is unpleasant, and really has little to do with what little plot there is. Nearly the whole film takes place in the dark. There is a lot of shouting. The crocodile is ridiculously fast over land, just to fit in with what the director wants to happen. Even the activities of apparently intelligent people are silly, like avoiding the crocodile by perching on a structure in the swamp. There is no humour. Believe me, no-one likes this so don’t watch it.