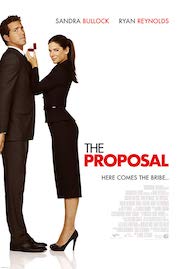 The Chief Editor of a New York publishing house is to be deported to her country of birth, Canada, because she has failed to renew her visa, and so she extemporises by saying that she and Andrew, her hard pressed assistant, are to marry. Later, encouraged by the possibility of promotion and a subsequent quick divorce he agrees, so they lie to the immigration agent, suggesting that they are on their way to Andrew’s family home in Alaska to inform his parents. In Alaska they are forced to share a bedroom and a bathroom and experience an unexpected level of intimacy which could change their relationship.

Margaret the editor creats fear and distress in the office. She and Andrew travel to Sitka, Alaska, where Andrew’s parents live in a mansion and seem to own half the town. The two are forced to pretend to be lovers, despite initially being able to sleep separately, he on the floor, she in the bed. They accidentally make physical contact while both are naked. She goes with the ladies of the house to a bar where a male stripper performs. They agree to marry in the town and people congregate. At times they drive about in a speedboat from which Margaret falls once. There is some drinking, no smoking and the aforesaid almost nakedness.

This was almost liked by the critics, many approving of the chemistry between Sandra Bullock and Ryan Reynolds. I liked the family as well. It is not rivetting stuff but manages to be an acceptable comedy. It made a lot of money much of it I think because of the nude scene, which appears in the trailer, and is actually pretty well done. The well worn plot comes out just as you would expect, but even so, if you are looking for something lightweight to view it is worth your time, and even a small fee.