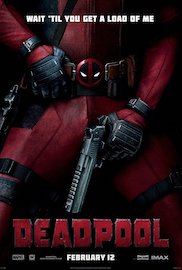 An irreverend ex-special ops man, after finding love with an attractive prostitute who he marries discovers that he has irreversable cancer, but is recruited by an organisation which says it can cure him. Its leaders put him through extreme hardship in order to awaken his mutant genes and are successful, giving him extreme healing capabilities, but the downside is that he is severely disfigured, preventing him from renewing his relationship. He engages in violent pursuit of those who changed him in the hope of improving his appearance, but will his lover take him back anyway?

The film opens with a firefight on a bridge, setting the tone for the rest, and over the next couple of hours we find out the reasons for it, what Deadpool used to be, how his love life developed and what his hopes are. There is a lot of violence with all sorts of firearms and edged weapons and plenty of blood and gore. The hero, if that is what he is, often speaks to camera, and there is some quite energetic sex, with some almost nudity (the IMDb content advisors saw more than I did), some actual nudity in a strip club and some drinking.