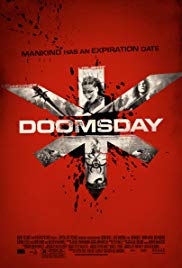 A contagion which has resulted in a wall being built between England and Scotland, and the the Scottish being left to die, has surfaced in London therefore requiring a special services group led by badass female warrior Major Eden Sinclair to make their way to Glasgow in armoured personnel carriers in order to locate a cure. Civilisation north of the border has broken down and they find that they must battle against the survivors, armed gangs in Glasgow and later knights in armour out in the country. Will they locate the cure and will any of them survive to deliver it to London.

The progress of the virus is narrated together with charts to make sure we know what is going on, the APCs are loaded up and make their way to Glasgow, the special services guys are attacked by what the film calls “marauders”, and there are a number of set pieces involving automatic weapons.  Also some sort of performances and later interaction between men on horseback and what remains of the team. Finally a sort of Scottish Mad Max event. So there is a bit of nudity, some scantily clad ladies and a lot of violence some of it quite unpleasant, but no sex, drinking or drug taking.