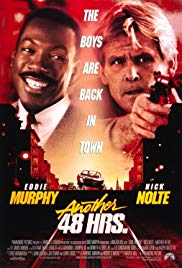 Jack Cates, a renegade detective, is on the track of a major drug dealer, the Iceman, but is under investigation for undue use of force – he has apparently killed an unarmed man. He also comes across details of a possible hit on Reggie Hammond, soon to be released from jail, possibly because he can identify the drug dealer. With Cates on the track of the dealer and killers on the trail of Reggie the two are forced to work together for a second time to prove the former’s innocence and to keep the latter alive.

The killers meet in a desert location and show themselves to be merciless, they attack the bus taking Reggie to town, Cates and Reggie argue quite a bit and participate in bar room brawls. Discussions in the police station and a bit of time in court, plus a number of shoot-outs in bars, strip clubs and hotels and one or two explosions. Some drinking, almost continuous smoking, implied sex and a bit of nudity