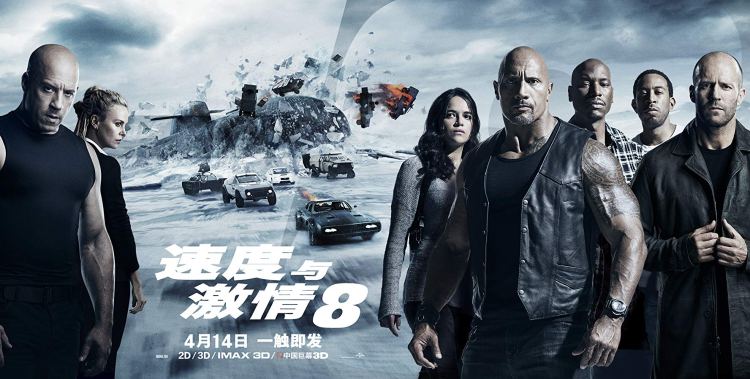 Elevator Pitch: While on his honeymoon with Letty in Cuba, Dom is recruited by Cipher, a cool female supervillain, to steal an EMP device while apparently assisting Luke Hobbs with its recovery. Cipher is holding Dom’s former girlfriend and son (who he did not know about) against his continued assistance. Mr Nobody gets the rest of the crew together and with the help of Dekard Shaw they get on his trail, chasing him through the streets of New York and eventually confronting him and Cipher in the frozen wastes of an abandoned naval facility in Northern Russia.

Content: No sex or nudity, but the trademark of a street race viewed by scantily clad young women is retained. Thereafter a succession of set pieces featuring cars, possibly the most spectacular involving hundreds controlled by Cipher crowding the streets of New York, and falling from high rise car parks. Time is spent in Cipher’s aircraft, which seems to float about without the need to land, even though we see people on the ground/ in the plane. Some shootouts with a variety of weapons and a lot of explosions.

A View: I am a bit of a car enthusiast, so I found it impossible to accept Dom’s ability to win a race reversing his burning car over the finish line, and I did not go for a two tone Bentley. I had to briefly access the internet to find out who these people were who Cipher was holding. The baby’s acting was better than Vin Diesel’s, hardly a surprise since most of the film seemed to consist of people sitting grimly at the wheels of their transport. It was not a film  for me but if you have followed the franchise maybe worth the cost of a download.

Additional Info: The spat between Dwayne Johnson and Vin Diesel has been much featured on social media, and it seems that The Rock will not be seen in F&F 9 due out some time in 2020.