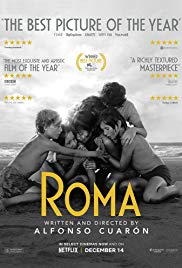 An upper class family live in the suburb of Roma in Mexico D. F. There are four children mostly looked after by the housekeeper, Cleo, who starts work before dawn and finishes well after dark. She is a rock in a family situation where the adult relationship is strained and the children are unruly. She becomes involved with a young man, but when she becomes pregnant he abandons her, but her employer supports her and on her way to hospital they become involved in a riot. They survive but as her employer’s marriage falls apart there are more problems top deal with.

A succession of carefully composed scenes showing us how Cleo lives, starting with washing the floor in the car parking area in which the dog lives. There are always dog turds on the floor, making us anxious that people may step in them – but only the father does. A Ford Galaxy only just fits into the space. Cleo has an affair with a young man who is seen naked and, after he leaves her, she pursues him to a shanty town in the boondocks, but he ignores her. In the aftermath of her personal crisis she continues to look after the family and they mostly seem to lack any sense of responsibility. There is nudity, people are seen to be drunk and there is gunfire.

Author of this site three technical books and two novels
View all posts by Victor R Gibson »
« Out of Sight (1998)
Austin Powers 3: Goldmember (2002) »