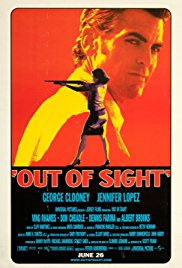 A bunch of criminals are in Detroit to rob a financier of his trove of uncut diamonds. They include Jack Foley and his associate Buddy, black former boxer Maurice Miller and two associates, all of them given information by the idiotic Glenn. They are being pursued by US Marshal Karen Sisco. All of them, except for Karen have been in the same prison and Jack and Karen have spent time in a car boot (trunk to you Americans) together during Jack’s escape. Will they get the diamonds, will Jack and Karen get together again, and if things go wrong who will survive?

Jack and Buddy witness one killing in prison, the escape takes place, Jack and Karen get together, since even though Karen Sisco is a marshal, she seems to be attracted to villains, and we see her imagining trysts with him. Karen also spends time with Jack’s ex-wife and deals impressively with other criminals. With an increasing level of tension the robbery is initiated. There is violence including a stabbing, and some gunfire resulting in people being killed. Karen in her underwear a couple of times and some implied sex, also drinking, but no actual nudity.