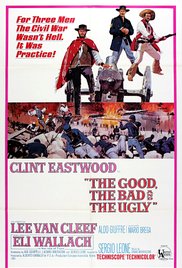 A couple of gunmen, running a scam involving getting reward money for one and then preventing him being hanged, hear that there is a fortune in gold hidden in a grave in a cemetery and so must travel across the country during the US Civil War, forced to remain together because one knows the name of the cemetery and the other the name on the grave. They are pursued by a third on the same quest, who at times takes them prisoner, but fortune and the conflict usually allow them to escape.

A whole load of set pieces some on a small scale involving a few gunmen stalking down deserted streets and shooting each other, and others involving the prisoners in POW camps and whole battalions of troops with field guns and machine guns taking each other on, with our heroes being no more than observers. The protagonists bicker and give each other a hard time, or sometimes others give them a hard time. There is smoking and drinking, but no nudity or sex.