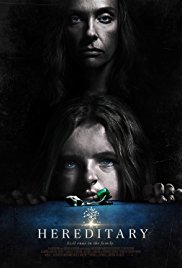 When the younger of two children is beheaded in a bizaar car accident the family, already struggling after the death of the wife’s mother, is thrown into chaos, and the situation takes an even darker turn when Annie, the wife, is introduced to a technique which allows her to contact the dead child in the spirit world; that is not the end of it; Annie’s mother’s grave has been desecrated, the elder son is behaving oddly, the dead girl’s notebook is full of new pictures and human forms are glimpsed in the glooom.

We spend time in the wife’s workshop where she constructs miniature dometic environments, and is to be exhibited in New York. The children behave oddly, at one point attending a sort of school party, and people drive about in a very depopulated environment, apparently Utah. There is a lot of threatening music, some quite frightening scenes and some random acts of violence which it would be inappropriate to describe here. There is nudity but no sexual content, and some smoking of marijuana and drinking.