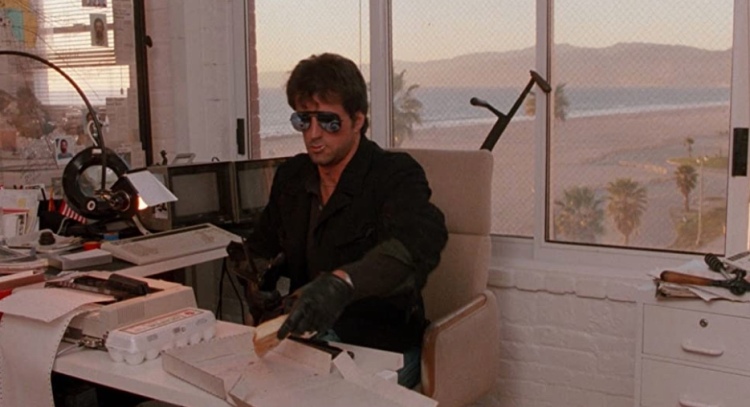 Elevator Pitch: A killer in Los Angeles, known as the “Night Slasher” leaves the mutilated bodies of young women for the police to find, and seems to be unstoppable until Lt Marion Cobretti, Cobra, gets on the case. He finds that Night Slasher is part of an organisation “The New World” whose objectives, although obscure, seem to involve the random deaths of members of the public. Some of them can be identified by supermodel Ingrid, who survives several attempts on her life, and eventually is spirited away by Cobra to a safe house. But they are unaware that one of the police with them is a member of The New World, so the safe house is anything but safe.

Content: We are spared a possible intimate moment between Cobra and Ingrid, although she appeared sexily clad in a photoshoot at one point. There are several car chases during which Cobra’s pimped ride is gradually destroyed. He is generally dissed by his bosses for causing deaths and damage and when at home we see that he does not have a life. There are tense scenes as Night Slasher gets close to Ingrid when she is in hospital and numerous firefights with hand guns and machine guns. If villains are seen in close-up we know that they are shortly to be exterminated in some particularly gruesome way.

A View: The critics universally disliked this outing, mainly because it is totally derivative and overly violent (even though it had been toned down to get an R rating). In the 1987 Razzies it was nominated in six categories, including Worst Picture, Worst Actor and Worst Screenplay.  You know exactly where you are from the start, as Cobra takes on a gunman in a supermarket, again!. But despite these negative vibes it made a lot of money and has a cult following. For me, choose something else from Stallone’s body of work (except Tango and Cash).

Additional Info: There is a lot of negative stuff about Stallone on the interweb, relating to this outing. He had been hired for Beverly Hills Cop, but rewrote the script to suit himself, and so the studio sacked him. This film is the result.