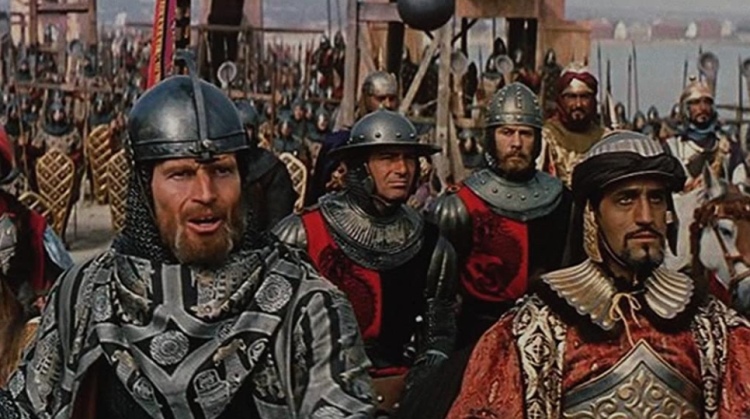 Elevator Pitch: The 11th Century Spanish peninsula is a hotchpotch of independent kingdoms with ill-defined boundaries, the southern part inhabited by Moors who had arrived several centuries earlier. The country is more or less stable although there are local conflicts as the Castilians push the Moors back towards the south. Later all are threatened by the Moroccan Almoravid dynasty. In this turbulent time a hero in the person of Rodrigo Diaz de Bivar, known by the Moors as “El Cid” emerges as the protector of the monarchy of Castile  and the leader of a combined Moorish and Spanish army against the invaders.

Content: No nudity, although sex is implied between Rodrigo and his estranged wife Jimena, after some time while they have been at odds because Rodrigo had killed her father in a duel. There are numerous state occasions where large number of people appear in armour and trumpets are sounded. A few mano a mano conflicts, one being a well presented single combat which Rodrigo wins, but only just. Many minor battles all leading up to the siege of Valencia by the Spanish and then by the Almoravids.

A View: If you want to the cinema to see this in 1961 you got a lot for your money since it was presented in 70mm Super Technirama Technicolor. To be honest that period in Spanish history is really difficult to get your head round and the presentation on screen incomprehensible at times, although it is true that Rodrigo killed his future wife’s father, resulting in them failing to consummate their marriage for years. It was nominated for three Oscars and was variously reviewed by the critics. If you really want to watch it, bone up on the history first, otherwise maybe you could let it play while doing your knitting.

Additional Info: I think because of Charlton Heston’s autobiography there is a lot of trivia available. One of the things I like best is the contract placed with a Toledo factory for the production of 7000 swords scimitars and lances, which took eight months.