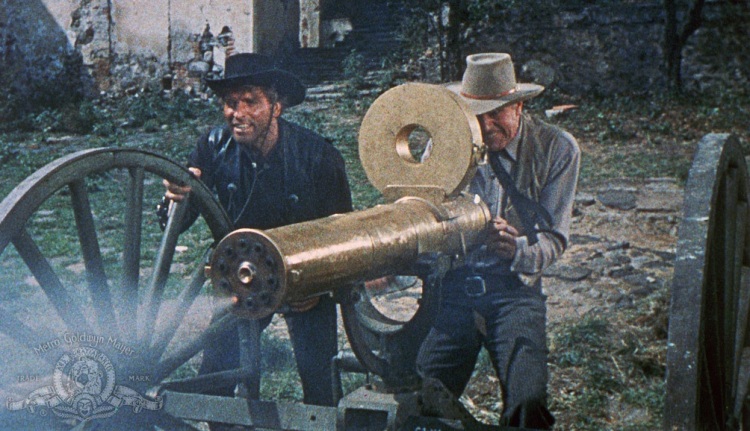 Elevator Pitch: In the 1860s while Mexico is in the throes of civil war, a group of American desperadoes are hired by the Emperor Maximillian to escort a coach containing a countess from central Mexico to Vera Cruz. They are led by the taciturn Benjamin Trane, played by Gary Cooper and the extrovert Joe Erin, played by Burt Lancaster. When they discover that they are escorting a hoard of gold coins hidden in the coach their allegiances change, finally forcing them to face up to each other.

Content: There is no nudity although young women are sometimes attacked by the gunslingers, with the intent of rape, only being saved at the last moment. Trane’s horse goes lame (the poor thing must have actually been injured) and he has to shoot it, Trane and Erin pal up and make a deal with the Emperor at a grand party. The rebel Mexicans are seen at times, in large numbers on the horizon, on top of buildings and at the edges of natural formations. The wagon train is attacked but they get away. They pass Teotihuacán. There is a big shoot-out in the finale.

A View: This film is said to have influenced a number of major outings which came later, including The Magnificent Seven and The Wild Bunch. It was a slow starter but livened up later. They say that today’s standard is to keep people engaged so that they don’t reach for their phones. It would have been unsuccessful in this regard. The very large cast of Mexicans, rebels and soldiers is impressive and in its day it must have been groundbreaking on the big screen. So it is another of those films which should be a watch for film enthusiasts, but maybe not for anyone else. There are a lot of westerns out there.

Additional Info: If you are a native English speaker, you may be unfamiliar with the name “Sara Montiel” but Spanish speakers will know who she is even today although she died in 2013. In the 1950s she was pretty hot.