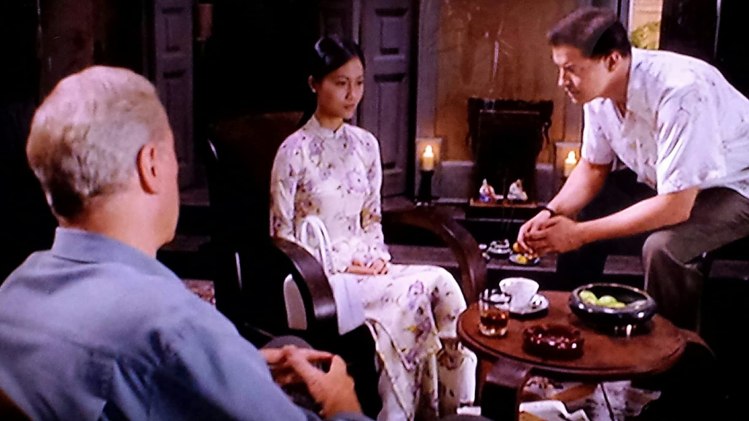 Elevator Pitch: It is 1952 in Vietnam, the French are fighting the Viet Minh and Thomas Fowler a reporter for the Times based in Saigon has a Vietnamese assistant and a beautiful Vietnamese mistress, Phuong. His easy life is disturbed by the arrival of an American, Alden Pyle, who may be an aide worker, who falls for Thomas’s mistress, and by a telegramme from London recalling him to Britain. In order to prevent his recall Fowler goes out in the field where unaccountably he meets with Pyle, who saves his life during a terrorist attack, but Phuong’s sister broker’s a new relationship between the young woman and Pyle which will only be prevented if Fowler gets a divorce. How will it all end?

Content: Saigon is a major character, and we see Fowler and Pyle enjoying the city and Fowler and Phuong in intimate, but not overtly sexual situations. They go out into the city to restautants and the dance hall where Fowler met Phuong. There are a few flashbacks. Once forced to do so the reporter trudges about in the mud with French soldiers. They come upon a massacre, variously blamed on the Communists and others. Fowler is pulled this way and that by events, and never sems to be quite in command of what is happening although he is the narrator. There is a shocking explosion.

A View: This film was well thought of by the critics. Roger Ebert gave it four stars although I would disagree with him that Phuong was purely motivated by money in her relationship with Fowler. Saigon, now Ho Chi Min City, is well represented. The film maintains the atmosphere of the book pretty well. It is quite a gentle presentation in line with the world weiry view of the reporter where nothing is really a surpise, until the climax. So while it is not a blockbuster it is well worth a watch as long as you are not an American patriot.

Additional Info: This film was presented in line with the novel, as opposed to the 1958 version which  made Pyle the hero and Fowler the villain.