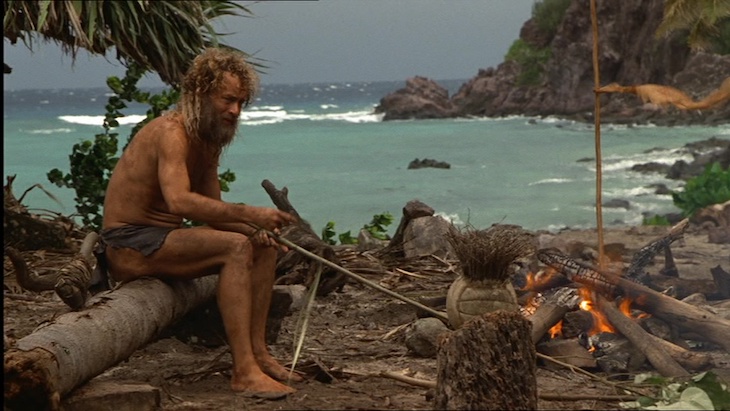 Elevator Pitch: Chuck Noland, a Fedex troubleshooter, is the only survivor of a catastrophic plane crash, and is washed up on a desert island. He gradually learns how to survive but after four years, with only a basket ball, “Wilson”, for company, he decides that he must make a bid for freedom by building a raft and taking to the ocean on it. If he makes it will his long time girfriend still be waiting and how else will his world have changed?

Content: We see Chuck at work, and then at a Christmas party from which his employers extract him to send him on a trip. He exchanges gifts with his girlfriend. The plane crashes into the sea and after that we survivie with him on the island as years pass, his only companion the basket ball with a face drawn on it in his blood (not gruesome), but seeing hm extracting one of his teeth is.  He builds the raft and makes it through the surf, but what then?

A View: I happened to catch this movie on a Saturday afternoon having been out to lunch, an ideal situation for it. It was well liked by the critics and the general public alike, although I did think from what we know today about searches in the ocean for lost aircraft that the searchers might have made more effort to find him, but no matter. So really forget about the beginning and the end and enjoy the actor on the island. Worth the cost of a download.

Additional Info: The initially chubby Tom Hanks become slim and hairy due to the fact that they took a year off in the middle of the production.