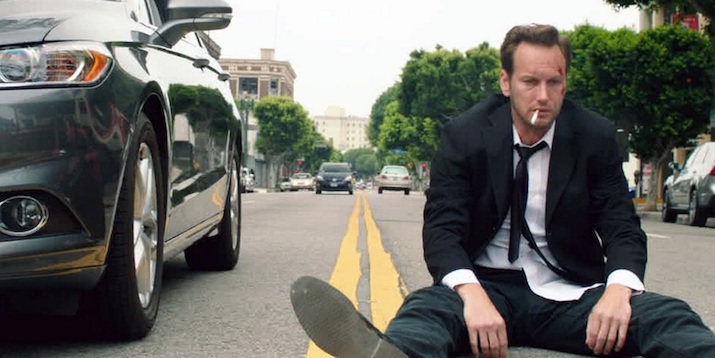 The Stretch of the title drives a stretch limo in LA. His girfriend has dumped him, a fellow driver he looked up to has blown his brains out and he owes a loan shark $6000 the repayment of which is demanded by midnight. In the hope of getting the money together he asks the limo company dispatcher, Charlie, to give him any high paying clients, which she does with mixed results until she gives him Karos a tech billionaire in trouble, who has Stretch dashing round the city to recover a briefcase after leaving him at a secretive sex club. Throughout he is exchanging text messages with a possible date for morning coffee. Will he make it?

A lot of voice-over as Stretch meets, has sex with, and is dumped by his girlfriend. Then clients are picked up, or not and finally Karos lands on the limo by parachute, the first of numerous outlandish events involving him as the night progresses and Stetch collects pursuers, including the loan shark’s enforcer, a massive tow truck driver and a team of FBI people. He sends and receives texts to and from a possible date. So even though there is energetic sex, there is no related nudity. Later there are provocatively dressed and semi-naked girls, and some snorting of cocaine.

This film never made general release, although one or two of the critics thought it should have done. I think there is too much narration, always a sign of trouble.. There are one or two good jokes regarding the casting I thought, including Chris Pine not being credited. The Guardian’s critic said that “some of you may never get on board” and this included me. By the time it really got going I had lost interest. Although watchable, this is not one of the director’s best works, so search for his other stuff, some of it is great.