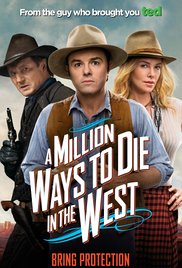 Albert, a sheep farmer out west in 1882 still lives with his parents, and is going out with the local belle, but she dumps him for the owner of the town’s moustache accessory shop and as a result he considers leaving for San Francisco. He changes his mind when be begins to fall for a mysterious new woman in town who is unaccountably skilled with a six gun. Little does he know that she is married to the most dangerous gunslinger in the territory, considerably increasing his risk of an early death.

Albert spends time with his sheep, he patronises the local saloon, where violent fights take place and where, as a running joke, his best friend’s fiancee is a prostitute but they are not intending to consumate their relationship till they are married. There are a number of set pieces, unsually involving gunfights and other events which result in people dying. So no nudity or sex, but quite a bit of drinking and some drug taking as well as almost continuous swearing, sexual references and jokes about bodily functions.