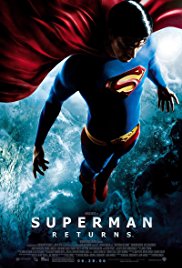 After an absence of five years Superman lands in his spikey spacecraft on the same farm as he did as a boy. The woman who became his mother is still the same, but back in the Daily Planet much has changed. Lois Lane is married and has a child, and has written negatively about Superman in the paper. More onerously Lex Luthor has plans for world domination and for the downfall of the Man of Steel. As Lex Luthor takes over the world can Superman overcome his own vulnerability and rescue Lois, her family and humanity.

Clark Kent goes to work at the Daily Planet, so stuff in the news room. Many action scenes as Superman overcomes disasters and fights crime, starting with a spectacular rescue of the craft involved in an aerial launch of a space shuttle. Lex Luthor does evil things and finds out about Superman’s vulnerability, and by chicanery becomes the owner of a large luxury yacht on which much of the story takes place. Lois Lane and her son are taken prisoner, resulting in much tension on the yacht. Could her son be the resault of a coupling between her and Superman? Maybe! No nudity or sex or drinking or smoking or drugs.