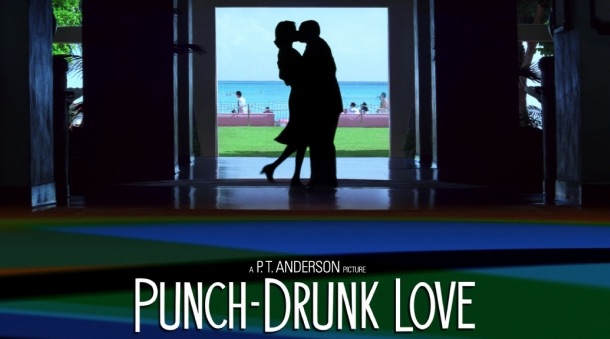 Elevator Pitch: Barry Egan is the owner of a small wholesaler of novelty bathroom equipment operating from an industrial unit, in a town in California. He has a number of sisters who give him a hard time, and cause him to have violent outbursts, but a friend of the sisters, Lena, meets him and if he had a clue he would realise she fancied him. But he is lonely and contacts a phone sex line who, once they have his details attempt to blackmail him. When the phone sex gang threaten his possible new relationship he realises that things have to change.

Content: Well – there is the phone sex line! There is also a bit of drinking. In the opening scene there is an unexplained violent car crash. Barry is obsessed with collecting manufactured puddings to get air miles. He has a number of meetings with Lena, and has violent outbursts at times. Someone leaves a harmonium outside his industrial unit. He spends a lot of time on the sex line mostly trying to prevent them blackmailing him, but when the threats become serious he has an outlet for him violence.

A View: Kermode has kept mentioning this film when referring to Adam Sandler. “Well if he did this he can’t be all bad.” It is an odd outing with surreal qualities, but obviusly not surreal enough for the general audience, because despite positive reviews it did not cover its production costs when it came out, however it is well thought of today and both my wife and I liked it. Worth the cost of a download.

Additional info: Paul Thomas Anderson got the idea for the air mile obsession when he read of an engineer who had spent only $3000 on special offers but had got over a million air miles in return.