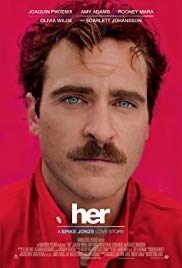 A lonely writer of letters for the literally challenged, who is going through a divorce, forms a relationship with his computer operating system  which, it is claimed by the suppliers, will learn as it goes along, and when he chooses a female voice and the system chooses a name ‘Samantha’, the scene is set for a romance of sorts. Samantha is able to “see” using Theodore’s portable computer device which also enables the two to remain constantly in touch, but how can things develop?

Theodore writes letters for people, he meets with his soon to be divorced wife, he engages in some phone sex in the night, he meets a possible one night stand, his relationship with the operating system develops,  the OS provides a possible surrogate sexual partner, he also meets with his near neighbours with whom he is friendly, particularly the wife who also becomes involved with her OS after her husband leaves her. There is some nudity and a bit of sex (mostly aurally) and some drinking.